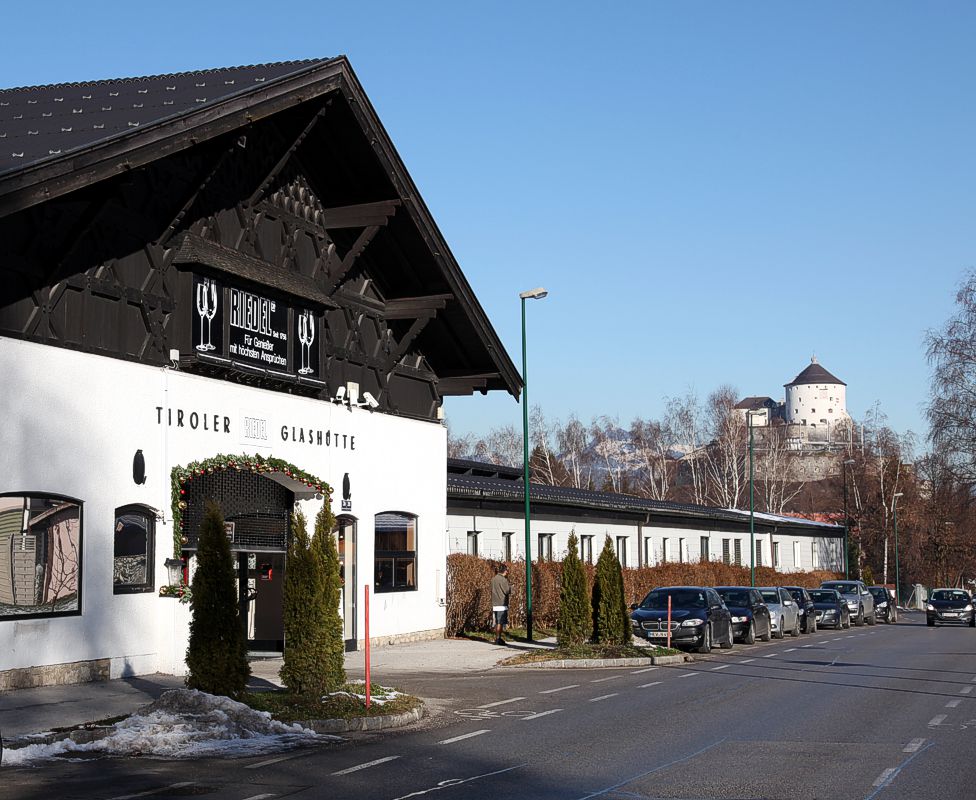 The RIEDEL Glashütte head office and and main factory is located in the center of Kufstein, Tyrol, starting here in the 1950ies.

The founding of the Bohemian glass manufacturer Riedel goes back to 1756. Until today, the company`s tradition of glass craftsmanship has been successfully transferred to the 11th generation despite a very checkered history. Probably the most significant turning point for the company is marked by the complete expropriation after the war ended in 1945 and the arrest of the head of the company at this time, Walter Riedel. It took him 10 long years to return from Russia in 1955. Also his son Claus Riedel was a prisoner of war, but escaped in Austria and found a new home in the Swarovski family who were friends of the Riedel family. In the mid-1950s the Riedels seized the opportunity to acquire the company Tiroler Glashütte in Kufstein that went bankrupt. The deal was financed again with the support of the Swarovski family. Later, under the leadership of Claus Riedel, the company refocused on finest, perfectly shaped wine glasses in small series which turned out to be the economic breakthrough. Georg Riedel continued this transformation by expanding the product line and driving the globalization of marketing and sales. His son Maximilian Riedel took over from Georg Riedel in July 2013 and now leads the company into the future. Riedel today employs 1,200 people in four factories and with its brands Riedel, Spiegelau and Nachtmann stands for approximately 250 million euros in total sales. 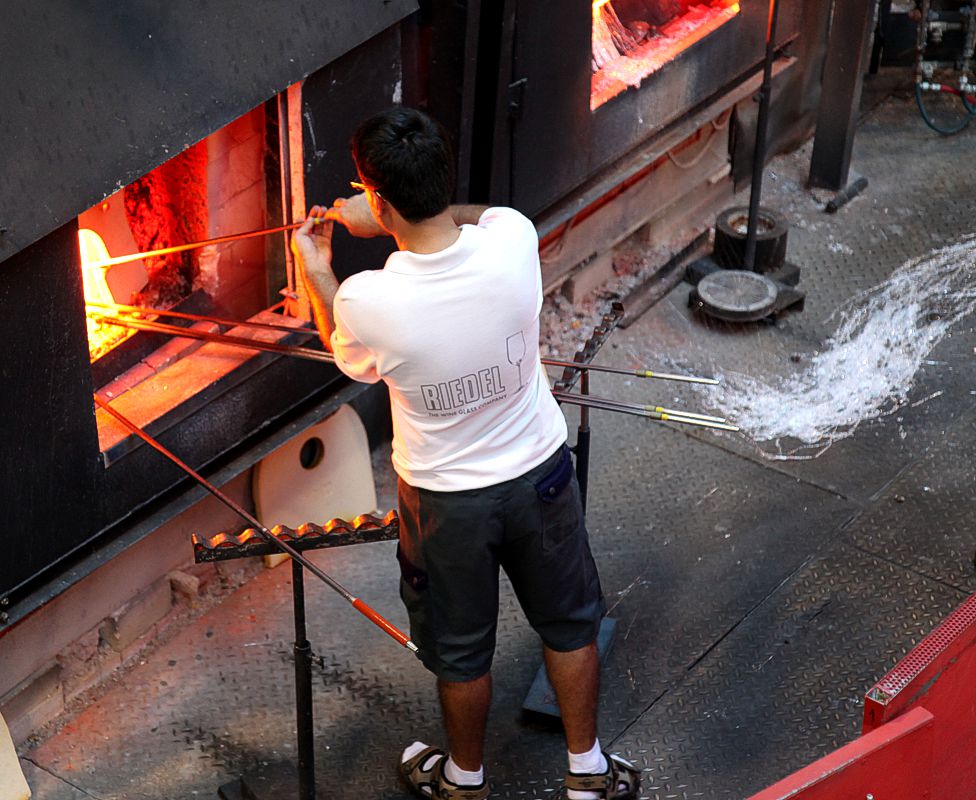 Glassmakers draw the viscous raw material of a mixture of metal oxides from the electric furnace.

Despite the expansion in the high-volume markets of machine-made glass, the German company FX Nachtmann was taken over in 2004, Kufstein remains the center of the brand. Here the company employs approximately 180 people who, besides running the head office, manufacture the company`s unique hand-blown glass of the top series "sommeliers" and decanters. Maximilian Riedel proudly makes the statement that the breath of at least one glassblower is in every wine glass of this series. For the production of the delicate and fragile, however lightweight, stylish and perfectly hand crafted glasses year long experience and a strong physical constitution is needed. The work in extreme heat requires full concentration on every move and also bears some risks. After all, the shaped glass parts are still over 600 degrees hot and need to be moved with extreme caution. Already many years ago it was clear to Claus Riedel that such experts would be difficult to find in the future. This came especially true as the tradition of glass blowing was really disappearing in Austria. To compensate this effect, today RIEDEL recruits glassblowers from Eastern Europe where this tradition is still alive. After the iron curtain fell, this is easy to manage. Walking through the shop floor it is obvious that the workforce today is relatively young. 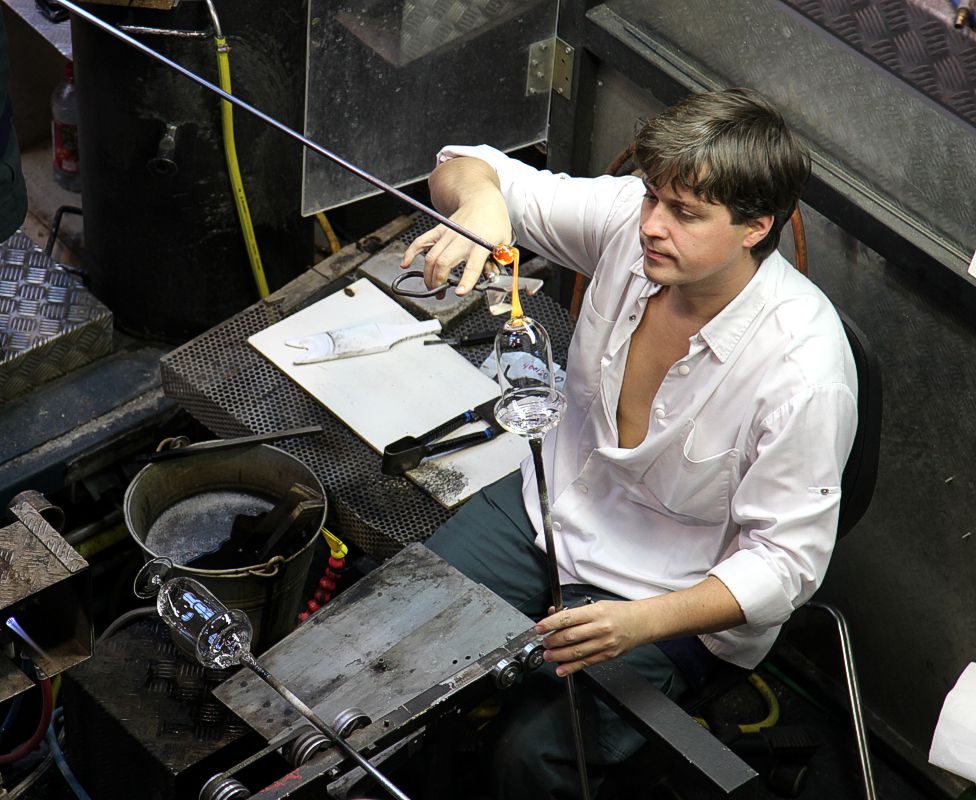 Experienced glassmakers manufacture by hand the delicate wine glasses of the Sommelier series.

If the production of sommeliers wine glasses is a difficult task, the production of increasingly complex shapes of decanters is something for the very best and experienced glassblowers. In addition to the function to aerate the wine decanters are also genuine art. Their shapes are so complex that using them is something that has to be trained first. Some decanters also act as a scoop, which means that only are small part of the wine can be poured at a time. The rest will flow back into the decanter. Some design ideas by Maximilian Riedel put his glassblowers before seemingly impossible tasks. However, this attitude is not accepted by the young boss and he demands that all forms must be producible. To date, RIEDEL seems to be reasonably successful in that. Small teams of up to five glassblowers work together to construct the creations step by step. An enormous effort in time and resources, which is not paid despite the high prices for such a decanter. Although, for example, the new double magnum decanter costs around $ 2,000 in the U.S. - it is always sold out for months. 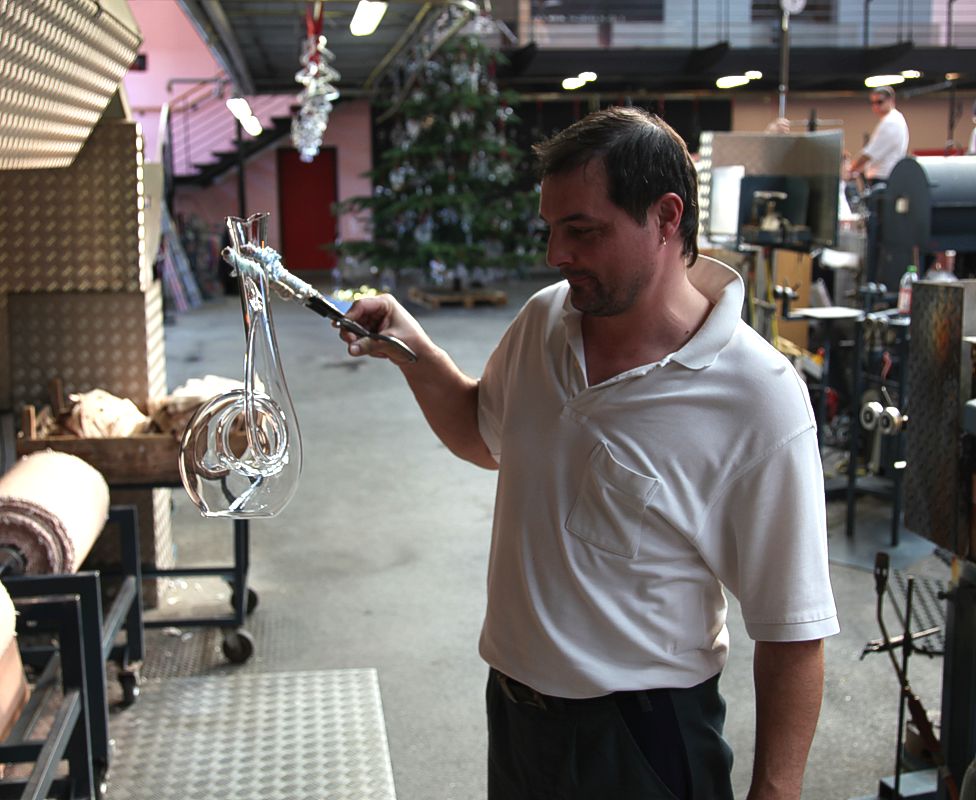 With pride and concentration the glass making expert double checks once more this artwork of a decanter. Such a complex structure made of glass can only be produced by very few people.

In fact, the U.S. is a key market for RIEDEL, also thanks to Maximilian. Before assuming the overall responsibility he spent a full 14 years in New York and built the brand on to epitomize the wine culture. Around one third of the production of artisanal glass products from Kufstein go to the U.S.. New is the boom in China, of which one RIEDEL promises in the house large growth rates, although recently the Chinese government has taken a rather negative alcohol course. A new trend especially in the U.S. recognizes Maximilian Riedel in the rapidly increasing popularity of German and Austrian Rieslings. A corresponding glass creation is in preparation and will be presented with a big event the market. He reveals that he also loves Pinot Noir from the Palatinate very. The answer, which particularly like then, but he remains guilty of caution.

Despite all the success RIEDEL has internationally with its over 30 specific sommeliers glasses for wine and spirits, France remains a difficult market. All the efforts by Claus and Georg Riedel to convince French wine producers about the favorable effect large-volume glasses have on their Cabernets, Merlots and Pinot Noirs were largely unsuccessful. Even for the futures tastings of Premiers Crus small sample glasses still are in common – just the moment when every point given by important tasters is crucial. The reason may well be that you have to pour more wine in a large glass and the wine is just so extremely expensive. 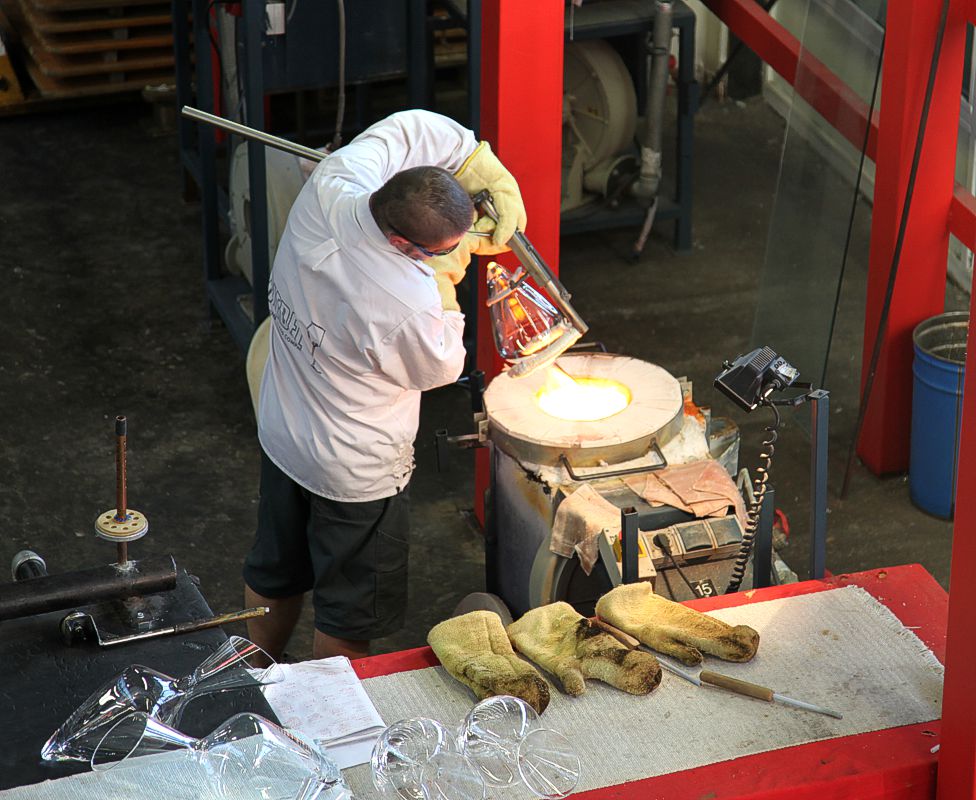 The upper edge of this decanter, type "TYROL", is once again reworked before it is placed on the cooling belt.

A full 80 euros is the price for a big-volume Bordeaux or Burgundy glass today. Frequent users of theses glasses know about the fragility especially when rinsing the glasses (by the way, none or only a very small amount of detergent should be used for that). Maximilian Riedel opposes vehemently against this argument and emphasizes that his products are "not complicated". To prove that, Riedel has for some time gone into a partnership with dishwasher machine producer Miele who guarantees that in their dishwashers the Riedel glasses can be rinsed easily without taking damage. We believe it gladly - and rinse further veeery gently by hand ...

While the core of the REIDEL brand is defined by the hand crafted sommelies glasses and decanters from Kufstein, the future of the company lies in the machine-made glasses. Maximilian Riedel picks up a Burgundy and a Bordeaux glass each from production by machine and from the Sommeliers series. Visually, the two models are indistinguishable, were it not for a clearly readable stamp with the word "restaurant". Once you take the glasses in your hand, you can feel the difference immediately: the machine-made glass is considerably heavier and gives a robust impression while the sommeliers glass radiates a fascinating lightness and elegance. With a price of less than 10 euros and its significantly improved fracture stability, the restaurant series was established to open up a large but widely undeveloped market. Clearly producible volumes a far higher for machine-made glass as each day the glassblowers in Kufstein only can produce as little as some 1,600 sommeliers glasses.

With Maximilian Riedel once again the transition to a new generation of the Riedel family seems to be successful. The young and clearly enthusiastic Maximilian Riedel will need all his momentum to defend the brand in a fast paced world against emerging competitors. Attacker on the market leader, it is even from their own country. The RIEDEL products ride the wave of luxury life-style in an environment of sustained global economic growth. This needs not always to stay like that. Therefore it is wise to open the factory to guests and visitors in order to build customer loyalty. In Kufstein everybody can at any time during working hours watch the work of the glassblowers from an elevated gallery. The visitors, charged with the fascination of craftsmanship, will afterwards enter the Riedel shop next door and real wine lovers will definitely not leave it without some of the wonderful glass products just seen to be produced. 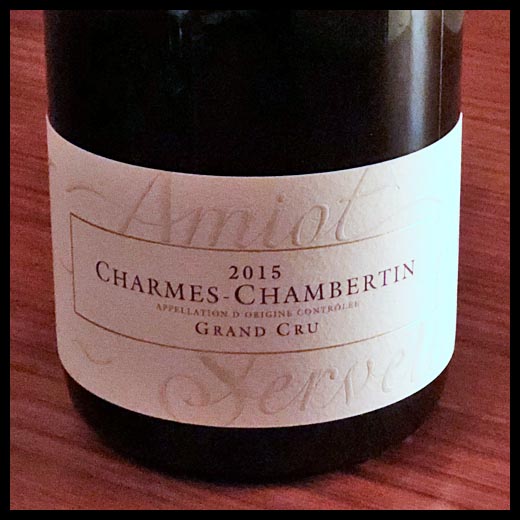 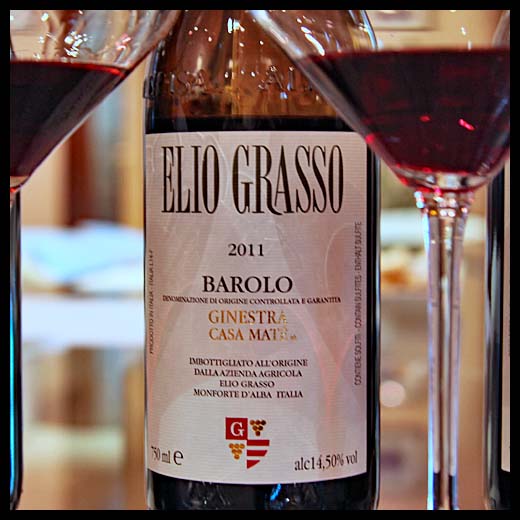 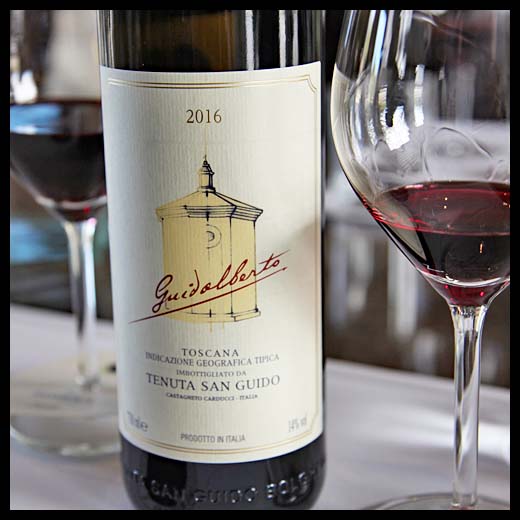